Week after week, we keep fighting, advocating, winning battles, and seeing the results of taking back state legislatures and governorship.  This week was no different. Some highlights are;

AND MORE SO READ ON

🧕 STANDING UP FOR IMMIGRANTS

💓STOPPING THE SPREAD OF HATE

ANOTHER ONE BITES THE DUST: It sucks to be related to the cheater-in-chief, as Maryanne Trump Barry found out. She has retired as a federal appellate judge in order to end an investigation into whether she violated judicial conduct rules by participating in fraudulent tax schemes with her siblings.

There was a lot of good to come out of big elections this week in Chicago and Pennsylvania.  But there were also smaller wins in local elections for candidates supported by Run for Something and Postcards to Voters. We may not succeed every fight but we can’t stop trying, because you have to be in it to win it.  The Democratic house is picking up steam in living up to their obligation to investigate and hold the administration responsible for their actions. And of course the field of qualified and intelligent democratic candidates for presidents just keeps growing to bring us great choices. I have yet again scoured the news for you so you can have this one place to read about all the positive happenings this week. My highlights are;

AND MORE GREAT STUFF SO READ ON END_OF_DOCUMENT_TOKEN_TO_BE_REPLACED

March madness for me is all the good that came out the legislatures in states newly controlled by democrats or democrat leaning like New Mexico, Maryland, and New York.  The New York budget negotiations wrapped up this weekend and it will take me a few days to sum up all the good in the first budget under a state fully controlled by democrats, so expect it to be in the next roundup, but it does so far appear to include criminal justice reform, a plastic bag ban, and congestion pricing.  My highlights for this week are;

AND MORE SO READ ON END_OF_DOCUMENT_TOKEN_TO_BE_REPLACED

Since other reports that may be of interest to you are not yet available you can get your fill of good reading with this weekly summary of some of the inspiring actions and accomplishments from across the country and the globe of those trying to save our democracy.  The British took to the streets to demand a reconsideration of Brexit, New Zealanders continued to show love and support to those mourning their lost love ones, and across the U.S. big and small local groups protested and descended on their state legislatures that were in session to demand progressive legislation and to try to stop regression on so many issues.  You can also follow WhatWentRight.org on Twitter at @WhatWentRight_ to get additional daily good news posts and information about actions and activities that you can participate in.  Some highlights from this week’s are;

It may have been particularly hard to see the good news this week after another horrific mass shooting sparked by hatred but this is the place to have your moment of positivity, because inspirational things did happen.  People across the world came together and showed their love, acceptance, and support for muslims in their time of need. The New Zealand government promised to pay for burial and support for the victims and their families and swift legislation to expand gun control.  The youth around the world came together to demand action on climate change to save the earth they will inherit.  While all that was going on, the courts and in-session state legislatures were busy making things better for all of us with decisions and new laws.  There is a lot more great legislation still making it’s way through the legislative process that I did not cover this week that hopefully will see the light of day soon.  The other highlights this week are;

AND MORE SO READ ON

END_OF_DOCUMENT_TOKEN_TO_BE_REPLACED

Congress is issuing more subpoenas and holding more hearings.  We had great decisions protecting immigrants, those in need of mental health services, blocking immigration questions on the census, and more.  We even saw progress on gun control.  It also feels like almost everyday now that acts of racial, ethnic, gender, religious, and LGBT discrimination are receiving media and congressional coverage with demands for accountability, change, and protections.  Thank you for all you do as we continue on this long road to change and please don’t loose hope. This week’s list of the good includes;

AND MORE SO READ ON END_OF_DOCUMENT_TOKEN_TO_BE_REPLACED

This week I took some time to travel to Washington D.C. to explore the National African American History Museum and it definitely lived up to the hype.  I highly recommend a trip there if you ever have the chance. It is a monument to a thoughtful and thought provoking look on over 600 years of history. I did have to sacrifice time researching and writing this week’s summary so I ask my readers to add their pieces of good news for the week in the comments for actions or accomplishments that I may have missed.  Now here is your short list of what went right this week;

END_OF_DOCUMENT_TOKEN_TO_BE_REPLACED

The OSCAR are coming but let’s not forget to honor all the great work that ordinary people, organizations, communities, and others do everyday to help save our democracy and make this a livable and just country for all.  Some of the movies nominated remind us how far we have come and how far we still need to go for equality and justice. This past President’s day protest and so many other actions show us that we are not alone, that we have not given up the struggle, and we will continue to make progress on the issues we fight for.

AND MORE SO READ ON…

🧕 STANDING UP FOR IMMIGRANTS

🗽BECAUSE MONUMENTS AND NAMES MATTER Saint Elmo Brady, the first African-American to receive a Ph.D. in chemistry, was honored with a National Historical Chemical Landmark dedicated to him on the University of Illinois campus.

💓STOPPING THE SPREAD OF HATE

☑️ ELECTION RESULTS  Democrats held on to the District 86 seat in a special election for  the Virginia House of Delegates.

One final note, I wish that more towns had pre-teen girls like the editor of the Orange Street News.

Indivisible, Move On, and many other groups are urging people to attend emergency rallies on President’s Day to protest the fake emergency declaration, so look up an event near you at www.crisisresponse.us/.   Make your voices heard so that there is more good news to report on next week.  If you spent hours yelling at your TV this week like me, this week’s list is here to remind you that our democracy is not lost and to have hope. Here is the brief summary, followed by the full list, in a new version of the blog I am trying out.  Let me know your thoughts. Don’t forget to like the post and share it to help spread the good news with others.

What brought me joy this week was seeing Stacey Abrams give a powerful Democratic response to the SOTU speech, as the first black woman to ever do so.  And thanks to state and local elections having real consequences, the new democratic Michigan AG is withdrawing the state from many federal cases seeking to undermine reproductive rights, environmental protections, the separation of church and state, civil rights, and more.  The new progressive and democratic governors, legislature, district attorneys, city councils, etc. continue another week of marching forward with the tangible changes promised during their campaigning. States matter!  Here is all the news you can read without cringing for this week and a view of a Fair Fight SOTU watch party. 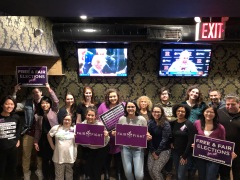 🧕 STANDING UP FOR IMMIGRANTS by not using state troops for a fake crisis at the border or state police to intimidate and arrest undocumented immigrants, treating naturalized service members with respect, standing up for vulnerable residents in Los Angeles, Palm Springs, Baltimore, and the Netherlands. #StandWithImmigrants
END_OF_DOCUMENT_TOKEN_TO_BE_REPLACED